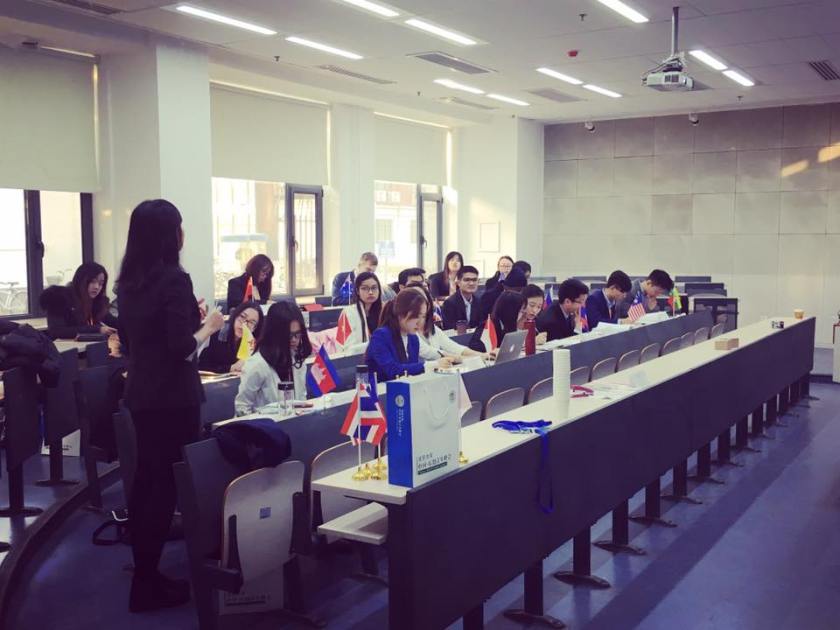 On the morning of Saturday December 2, Peking University’s School of International Studies building was abuzz with activity.  Young delegates all dressed smartly in suits were filing into the teaching rooms which for today were to be transformed into debate chambers.

The model conference aimed to establish a platform for dialogue among young people and simulate the real-world workings of China-ASEAN diplomacy and negotiation.

Most of the students had spent the previous evening training for today’s model meeting or knuckling down with their partners to put together their opening statements and research their country’s position in as much detail as possible.  For those who hadn’t participated in a model conference like this before, there were some nerves.

Seah Wen Yan, Chairperson and principal organiser, was enthused by the amount of preparation that the students put into the model meetings.  “They did a lot of research and covered their position papers.  It was very heartening to see how seriously they took it.  Even before the meeting a lot of the students called the chair of the meeting they were attending to ask them ‘how do we discuss this, how do we go about doing that?’”

On Saturday morning the delegates were hoping that their hard work would enable them to have a fruitful discussion on the key issues related to their committee.  The best, most practical, or innovative ideas would be compiled on the joint statement and presented to all the committees the following day.

The students were divided into five committees for Saturday’s model meetings; the China-ASEAN Leaders’ Summit, the China-ASEAN Ministerial Meeting on Youths, the China-ASEAN Transport Ministers Meeting, the ASEAN +3 Meeting and the East Asia Summit.  Each summit had a specific topic; the future of China-ASEAN relations against the backdrop of the One Belt One Road Initiative, youth entrepreneurship, regional transport network, tourism cooperation, and disaster management, respectively.

The delegates represented the ten ASEAN member states as well as observer states; namely China, USA, Republic of Korea and Australia.  However they did not represent their own home country, but were intentionally given the opportunity to represent another country.

Seah Wen Yan explained that this decision was taken to enable the delegates to see the issues from another country’s perspective.

“We deliberately designed the meeting such a way that they would not represent their own country.  They would represent another country and they would do intensive research on that country, not their own.  That’s because the main objective of our summit is to let them understand other countries and promote mutual understanding.”

Ben Yeong, a student from Malaysia representing Brunei Darussalam, agreed that representing another country was beneficial to the promotion of closer ties between nations.

“Today I am representing a country that is not my nation of origin and it allows me to think from that country’s perspective.  My nationality is Malaysia, and Malaysia and Brunei will have different views on the importance of, say, piracy or the transportation system because the transportation system in Malaysia is more advanced than Brunei which makes Brunei have more concerns in that regard.”

All the meetings were conducted under formal UN protocol.  For example, delegates had to raise their placards before speaking and would refer to their fellow students as delegates, while refraining from using first person pronouns when speaking.  For many students this was their first experience of a model conference, making the professionalism with which the discussions were carried out all the more impressive.

To kick off the conferences, the delegate(s) of each nation read out their two-minute opening statement in which they set out their country’s position on the relevant topic.  The chairs of the committees reported that an overwhelming majority of the opening statements were prepared with great diligence and delivered with real authority.  The representatives of Brunei in the Transport Ministers’ Meeting delivered a convincing outline of their position before they had their fellow students in fits of laughter by finishing their statement with an emphatic desire to “make Southeast Asia great again!”

The morning discussion was full of lively debate as delegates probed and built on each other’s ideas until they were able to make some useful, concise suggestions to be further debated in the afternoon session.

Seah Wen Yan attended several of the committees and was particularly impressed by a suggestion brought up in the Ministers’ Meeting on Youth:

“Their points on e-commerce were very interesting and insightful because personally I didn’t anticipate that they would focus on that, so I felt it was a fresh perspective.  E-commerce is very important in the China-ASEAN region and one of the main areas that the region is moving towards.”

As the minute hand on the clock ticked round on Saturday afternoon, the debates were given an extra impetus as the delegates were aware they had to meet the deadline by which to submit their joint statement. Last-minute discussions took place and differences were ironed out in order to produce the final document.

After the deadline, preparations were made for Sunday morning’s presentations, during which they would illustrate their proposals to the student audience at large. 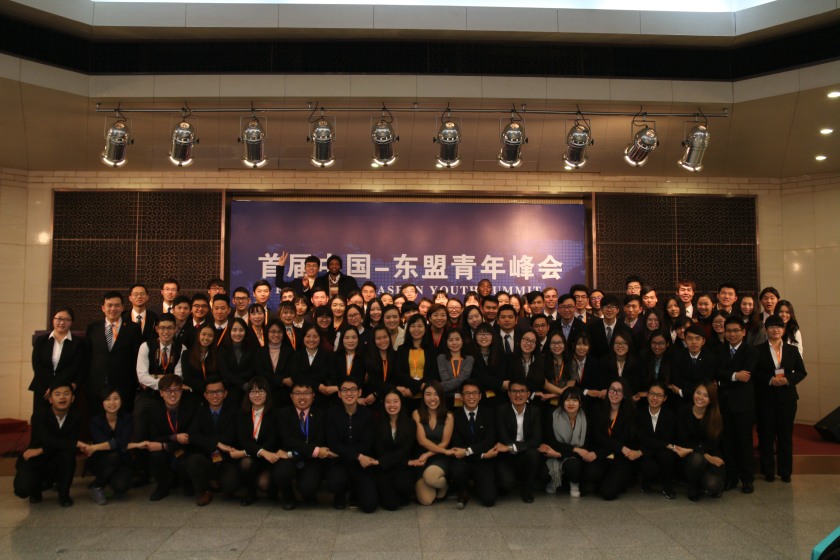 The proposals were judged by a student panel and feedback was provided by Professor Zhai Kun, Director of the Centre for Global Policy Studies, Peking University Institute of Ocean Research.  Zhai Kun was well impressed with the overall quality of the student presentations.

Once the presentations had all been delivered the students could finally relax, enjoy the closing ceremony, and reflect on what had been gained from the model conference.

Chen Yi Qie and Feng Xin, two Chinese students at the Central University of Finance and Economics, said that the significance of the summit lies in the importance of cross-border dialogue.

“We major in international politics so we think it’s very important for young people to communicate with each other, especially with people from foreign countries.”

Ben Yeong emphasised that it is young people who will reap the rewards of improved relations among China and ASEAN.

“The meetings have allowed us to have a discussion about how we can find solutions to all of these different issues that are facing Southeast Asia because at the end of the day the main recipient of policy decisions will be the next generation.  Ten years from now we are going to move forward to a higher level in our own countries and we are the ones who will see the results of these initiatives.”