China and ASEAN countries are linked by rivers and mountains, with close geographical connection and shared ecological environment. Both sides are faced with the common challenges and opportunities of economic development and environmental conservation. Enhancing environmental cooperation is conducive to improving the overall environment of the region, reducing the costs of natural resources, ecosystem and environment for economic development, and implementing the UN 2030 Agenda for Sustainable Development with mutual benefits and win-win results.

In 2009, China and ASEAN formulated and adopted the China-ASEAN Strategy on Environmental Cooperation 2009-2015, providing the guidance for environmental cooperation.

In 2010, the Ministry of Environmental Protection of China (MEP) established CAEC, which was officially inaugurated in 2011. The center is responsible for coordinate and implement the ASEAN related environmental cooperation activities.

I.Organizing ASEAN-China Environmental Cooperation Forum. The forum is an important platform for China and ASEAN to conduct high-level policy dialogue and promote pragmatic cooperation. The forum is focused on ASEAN-China environmental issues of common concern, with the participation of policy makers, entrepreneurs, academicians, experts and other stakeholders from China, ASEAN and international organizations. Since its inception in 2011, the forum has been successfully held five times, with about 1,000 participants. The ASEANChina Environmental Cooperation Forum 2016 will be held in Nanning, Guangxi Zhuang Autonomous Region, on September 10-11 this year, with the theme of “Sustainable Urban Transformation for Green Development”.

In collaboration with ACB, CAEC and the UNEP Regional Office for Asia and the Pacific (ROAP) jointly implemented the Project of “Strengthening the Capacity of South East Asian Countries for the Development and Implementation of the Biodiversity Strategic Plan 20112020 & Aichi Targets”. Under the project, in 2013, CAEC and ROAP organized the ASEAN-China Capacity Building Workshop on Updating/Developing and Implementing National Biodiversity Strategies and Action Plans in line with Aichi Targets in China and ASEAN in Kunming, jointly compiled a report named Experiences and Good Practices in China and ASEAN on Biodiversity Planning and Implementation.

CAEC and Chinese Research Academy of Environmental Sciences (CRAES) jointly  organized the China-ASEAN Forum on Ecological Conservation & Remedy Technology for Coastal Wetlands in March 2016. The forum came up with the Proposal for Strengthening China-ASEAN Cooperation in Coastal Ecosystem Conservation, forming a basis for the future cooperation in the area of coastal wetland protection.

In response to the request of the ASEAN Secretariat,  China is actively promoting cooperation on peatland conservation with the ASEAN member states. CAEC and ACB  developed “China-ASEAN Project on Peatland Conservation Cooperation” to be supported by the ASEAN-China Cooperation Fund. This project will hopefully be implemented in the near future.

V. Cooperation on Environmental Education and Awareness. The China-ASEAN Green Envoys Program (GEP) is a flagship program in the area of environmental education and awareness. Since 2011, 12 activities have been organized, focusing on ecological innovation, green economy policy, urban environmental management, environmental monitoring and pollution control, etc. More than 500 representatives from ASEAN government agencies, schools and research institutes attended the activities, which helped enhance the environment management capacity in the participating countries. 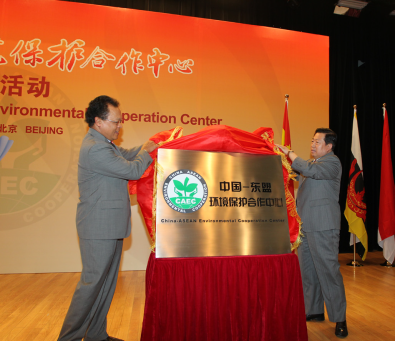 The ASEAN countries are important cooperation partners for the Belt and Road Initiative. Ecological and environmental conservation is one of the important aspects of cooperation under the Belt and Road Initiative. In the meantime, ASEAN has made steady progress in the construction of Social and Cultural Community in which the environment is one important element. Therefore, China and ASEAN face unprecedented opportunity for further cooperation on environmental protection. At this moment when China and ASEAN are celebrating the 25th anniversary of the establishment of China-ASEAN dialogue relations, standing at a new starting point, we believe that China-ASEAN environmental cooperation will be further enhanced in the future, and make its contributions to the sustainable development and prosperity of the region.

Peng Bin is director for ASEAN-China cooperation at the China-ASEAN Environmental Cooperation Center.